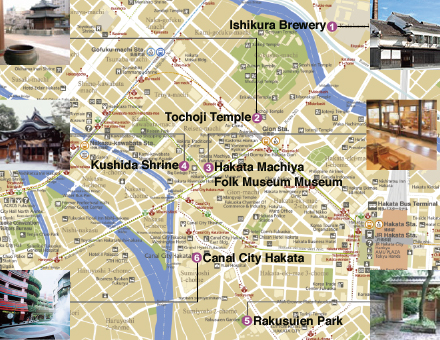 1.Ishikura Brewery
Started as Hakata’s oldest sake brewery, the sake storehouse registered as an Important Cultural Asset is now turned into a restaurant of Japanese cuisine. Short tours in the premise are also popular.

2.Tochoji Temple
The oldest Buddist temple in Japan of the Singon sect, founded by Kobo Daishi, otherwise known as Kukai. The temple hosts the wooden “God of mercy with 1,000 hands,” which is designated a nationally important cultural property, and the largest wooden statue of Buddha in Japan.

3.Hakata Machiya Folk Museum
This museum is a restored Hakata townhouse (machiya) and recreates Hakata town during the Meiji and Taisho eras (around the turn of the 20th cent.). The lifestyle and culture of Hakata in the early 20th century is introduced and there are daily demonstrations of traditionalcraftwork such as Hakata-ori textiles and Hakata dolls.

5.Rakusuien Park
A Japanese garden and a tea room in a serene atmosphere. The park was developed on the site of a Meiji era (late 19th century) villa belonging to a well-to-do Hakata merchant.

6.Canal City Hakata
Canal City Hakata, with a canal running through its center, is a commercial complex that houses hotels, theatre, cinema complex, specialty shops, restaurants, and more. This is one of the highly popular spots in Hakata. 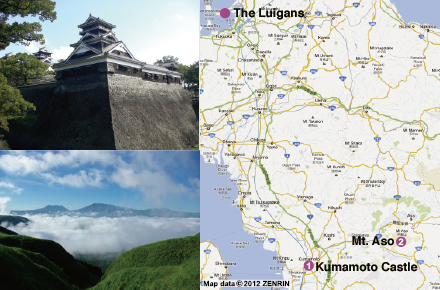 1.Kumamoto Castle
The enormous Kumamoto Castle is one of the three most famous castles in Japan along with Osaka Castle and Nagoya Castle.
Designed by Lord Kiyomasa Kato, it features unique stone walls called Musha-gaeshi, a device invented to prevent ninjas or other enemies from invading.

2.Mt. Aso
Mt. Aso is the world’s largest compound volcano, with a huge crater basin 18km from east to west and 24km from north to south, from the center of which five peaks called the Aso gogaku soar up toward the sky. Mt. Nakadake is still an active volcano, and you maybe able to see the red hot bottom of the crater or even the pools of boiling lava.

October 24, Free afternoon
Students may walk around Fukuoka downtown as they like.Hakata Okunchi Festival will be held on this day.Autumn Festival of Kushida Shrine on the 23rd and 24th of October is the seasonal feature of Hakata. This traditional festival of 1200 years old is held for giving thanks to the rich harvest of autumn. The pomp-filled parade with kids in traditional ritual costumes, lion dance (Shishimai), brass band and beauty contest winners from around Kyushu is worth seeing! There are also other events including a market celebrating the rich harvest and a sumo tournament. 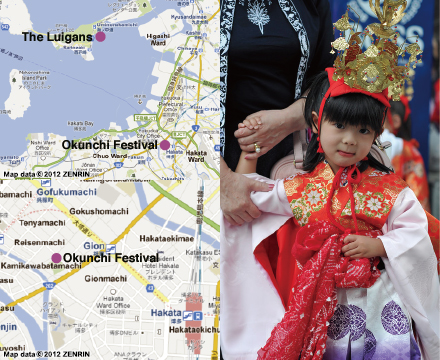